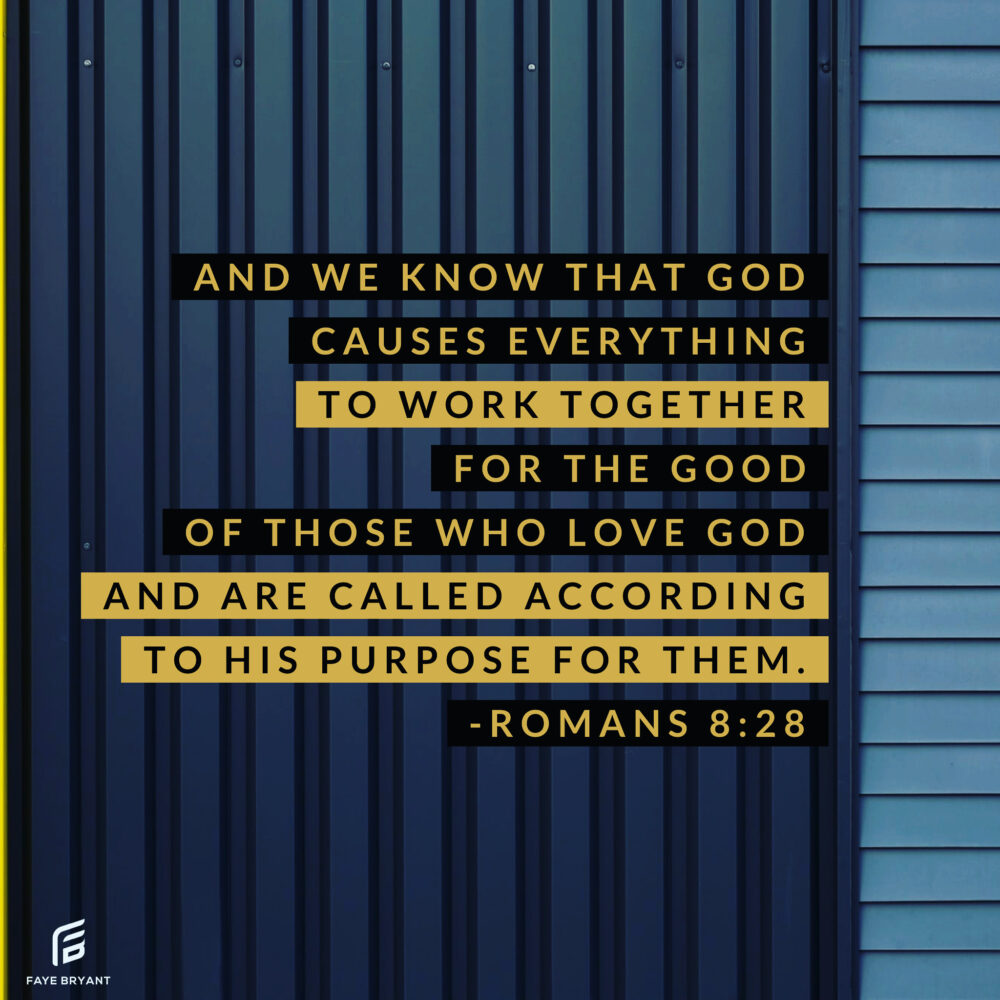 How often have we heard Romans 8:28 thrown around as a verse that promises that God will work out everything just like people want? Or that it applies to everyone?
The problem is, Paul wrote neither of those things.

“God will cause everything to work together for the good…” The reality is, we don’t always know what good is.

In 1990, my heart was breaking. My husband was so involved with another woman that right after his father’s funeral in Florida, when his wife, ten-year-old son, and in-laws sat down for dinner, he talked on the pay phone to his girlfriend. This was the second time in three years I was going through this. Even as I contemplated divorce, I laid these words before God, fully expecting the “good” to be a restored marriage.

The marriage wasn’t restored. Emotional abuse turned physical. Divorce was filed. The woman he said he wasn’t involved with became his wife four days after the judge banged the gavel on our divorce.

Where was God, I wept. This verse was a LIE, I thought. Then just as quickly, I was led to read the words again.

My good would have kept me an emotional victim with waning faith, no confidence, teaching these ways to our son, seldom even attending church, hardly every opening the Bible. God’s good rescued me from the abuse, the shame, the trauma, and gave me confidence, health, and a life of joy and ministry for which He designed me.

If we’re going to cling to this verse and pray it over our circumstances, we have to be willing to admit that our solution to the problem may not be the same as God’s.

For some, the “good” was to be healed by passing from this life to heaven while others were healed here and remained. God answered both prayers the same, causing the circumstances to work together for the good of those who loved Him.

Believers in places where they are jailed, tortured, and killed because they bear the name of Jesus call out these words, too. Do they expect that the suffering will end? I’m sure they do. Does their faith end because it works out differently than they expected? Possibly. Can we trust that ended or not, their suffering served the good of those who love Him, those who are called according to His purpose for them? Absolutely.

While we would like to apply these words to the world that doesn’t know Him, they don’t. Those who don’t love God aren’t called according to His purpose for them – or at least they haven’t answered that call. Believers, these words are for you. This truth is for you.

Let us trust in these words today. Let us pray them over ourselves, our family, our community, our nation, but let us remember that our thoughts and ways are not the same as the Lord’s and His are always right and good.