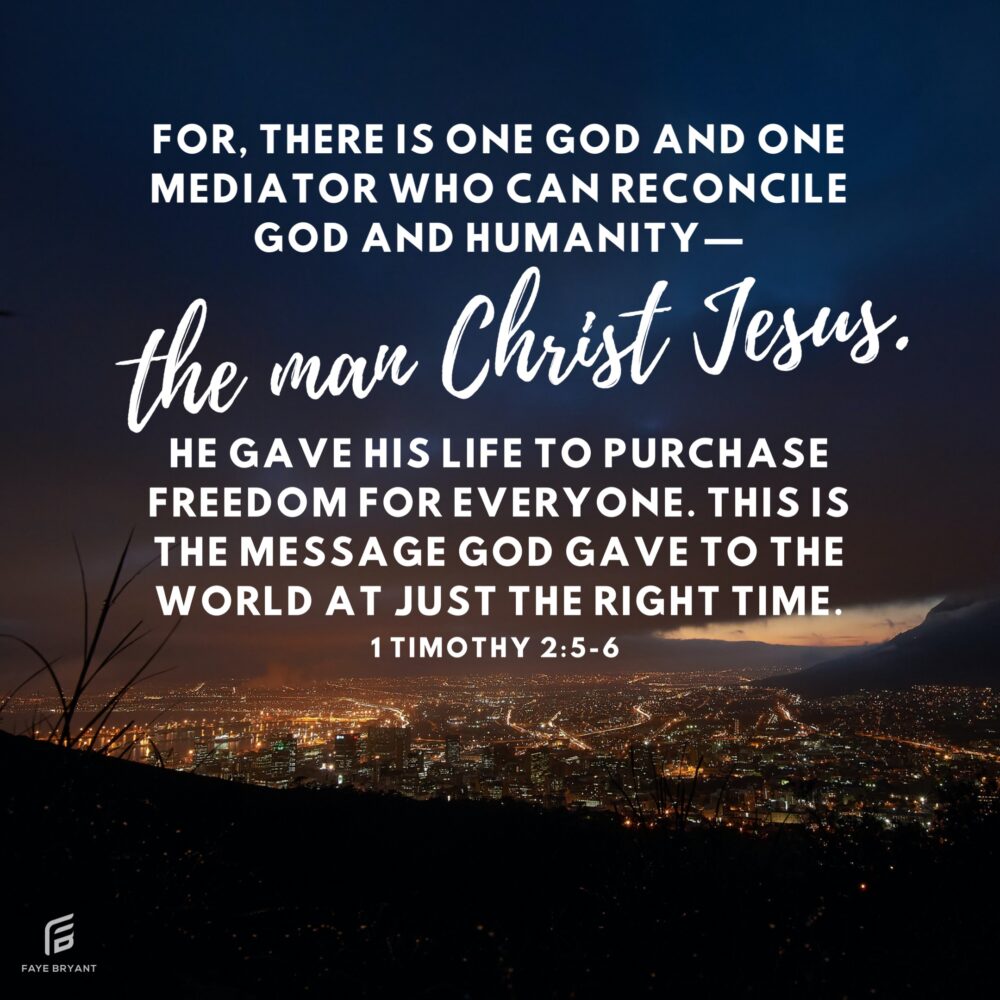 What rich words! What joyful thoughts! Okay, okay, follow with me. Not going to be easy to keep up with me this morning!

God knew before He said “Let there be light!” that mankind would sin and choose things other than Him. He knew that. Still He lifted the dust and formed a man, then took one of his ribs and made a woman. Knowing what would happen, He made the plan to come to earth in the form of a man to walk among people, then take on the sins of all people, past, present, and future and die a horrid death on the cross to offer all people a chance to return to Him, to reconcile the broken relationship that exists between God and humankind.

One God. One Mediator. There is no other. God is one, yet known as three. He is Father, Son, and Holy Spirit. He died to purchase our freedom from the consequences of unrepentant sin.

“The Man Christ Jesus” is a phrase that is so full of meaning, I don’t know where to start! Timothy refers to the name Jesus called Himself, “The Son of Man.” Perhaps done to remind us that Jesus walked the earth just like we do. What fascinates me is the next two words. See, “Christ” is not part of Jesus’ name, it is His TITLE. It means “Messiah” or “Anointed One.” We let the word roll off our tongues without a second thought as though we’re calling two names of the same person. Maybe if we used it the way it once was, saying “Jesus THE Christ.”

When Timothy wrote these words in his letter, he was identifying Jesus as God, Mediator between God and man, the Man-God, and the Messiah come to save mankind. See? Rich!

When we recognize God as Who He really is, the fact of His death in our place becomes so much more amazing. Even though mankind broke the covenant God instituted, HE made the way for mankind to be reconciled with Him. He did all the hard work, all mankind must do is accept that and move back into the covenant relationship.

Speaking of acceptance, we need to recognize that the death, burial, and resurrection of Jesus was for every human being that ever lived or ever will live. He died for everyone. Sometimes that truth gets twisted into saying everyone gets to return to God. Not so. While God’s love for mankind is unconditional, He loves us all, period, His salvation is conditional. It requires application. It requires change. All of which He has already accomplished for us, so all we have to do is surrender to Him and His lordship, His guidance, His correction, His sovereignty. Sadly, many have and will refuse to do that, putting themselves on the throne of their lives.

Friend, Jesus did die for you, for everyone. That isn’t a free ticket to reconciliation with God, though. While the gift of salvation is free, meaning we don’t have to do great deeds to be noticed in order to be given this gift, it’s not automatically applied. The gift is there. The gift is offered to us. We must surrender to the Creator and accept the gift of redemption. Not everyone who hears the message of His salvation will accept it. My hope is that you have or that you will.