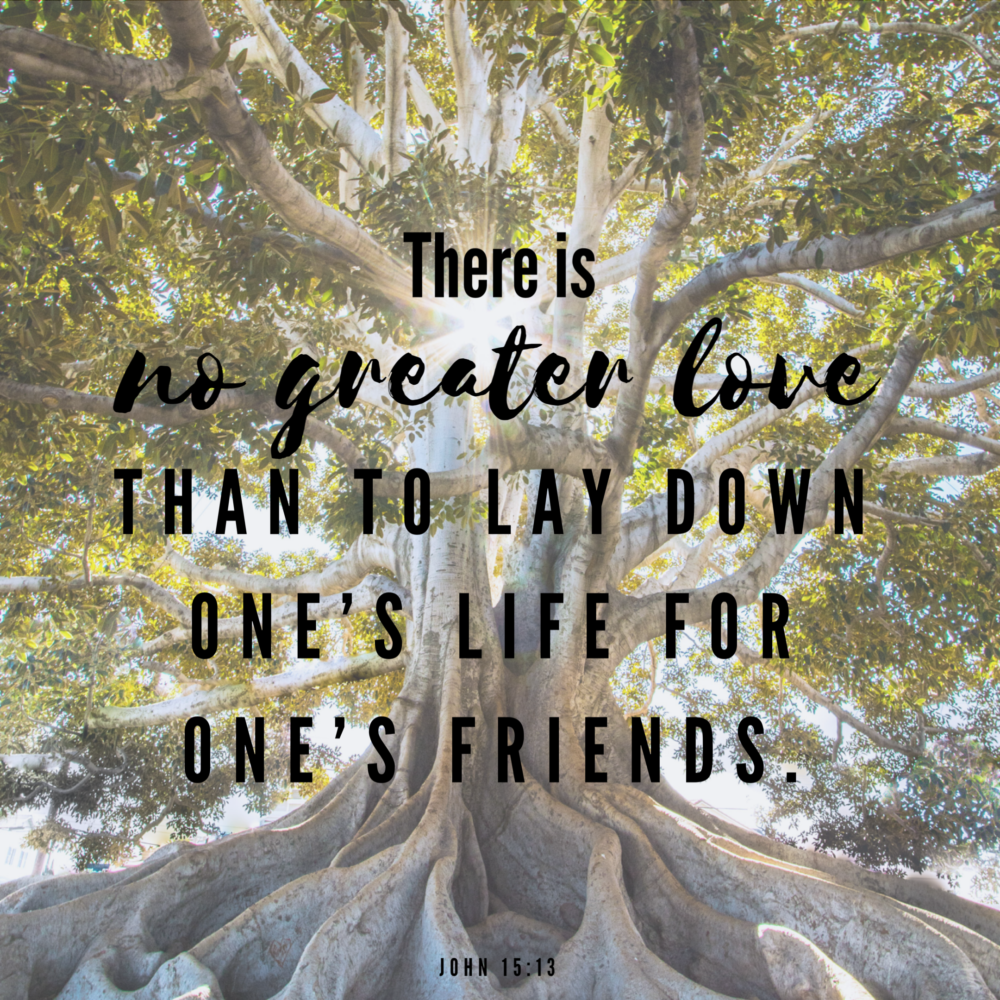 With today being Memorial Day in America, the day we honor those who have fallen in the service of their country, this verse can easily be thought of as applying primarily to them. I know when my dad joined the Navy, it was to get away from rural Iowa to see the world, but when the bombs dropped on Pearl Harbor, his resolve was to prevent any further attacks on his beloved country and to serve her interests in Europe, the South Pacific, and later Korea. Dad sacrificed his life for 12 years, giving everything he had for his nation and the concept of freedom.

See, while Dad didn’t die in service, he gave his life. He could have been making a better living, growing a family, learning a trade (he went in at 17)… living life. He chose instead to give up his life and many of us do the same every day. He wasn’t forced to do that. Matter of fact, he chose to keep signing up again and again.

The mom who loves her family and takes time from her day to prepare meals, to do laundry, to prepare a meal for a sick friend, and so much more is giving her life for her friends. She isn’t forced to do that, she chooses to do that.

The father who gets up early after being up late helping with homework to head away from his family each day gives up his life for those whom he loves. He isn’t forced to do that, he chooses it.

The ones who volunteer at the food pantry, the animal shelter, serving the homeless, at the library, at church, are laying down their lives for their friends. They aren’t forced to do that, they choose it.

The biggest sacrifice for those loved is that made by Jesus, giving His life for every human born, so that those who would accept that gift of His tortured death, unceremonious burial, and brilliant resurrection as their own would have life eternal. He wasn’t forced to do that. He chose it.

We should be grateful for all who lay down their lives for us. The service members who fight and die so we don’t have to, to gain and maintain our freedom, the parents who put their children before their own lives, the volunteers the world over who give of time and resources freely without agenda, and Christ who gave Himself for us.

More so, we should become examples. We should be giving up the me-first attitude. It can be as simple as putting down our book to get that loved one a drink or as complex as getting the grocery list of a friend and doing the shopping and delivering the food at their door.

Every day we can stop our lives for a few moments in order to serve others and that, my friends, is showing God’s love tangibly.

Let’s do something about this today. If you know a Gold Star family who lost a service member, let them know that their sacrifice is seen. Their hearts are still broken. If you know a family of a law enforcement officer who was slain, let them know their sorrow is yours as well. Take the opportunity to serve others today, tomorrow, and every day, laying aside your choices, your life, in order to do for them.