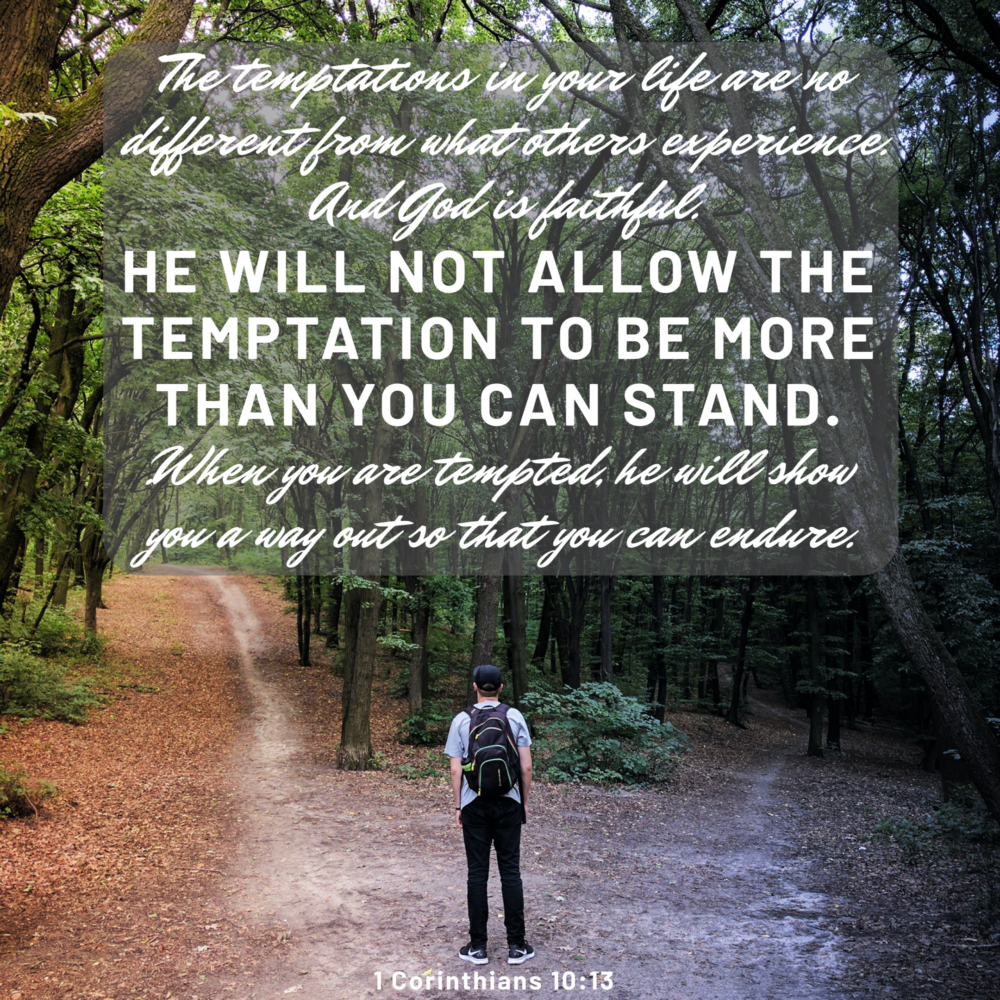 I love this verse. I don’t love how people take it out of context.

God said through the Apostle Paul that we are normal when we are tempted. He said that the temptations we face aren’t new or different than what every other human faces. He goes on to say that He is faithful to not let that temptation become more than we can handle. Oh, what a glorious and amazing God!

What God does NOT say is that He will not put more on us than we can handle.

At one time, we can have a cancer diagnosis, a child rebelling, a parent in crisis, and marital troubles. People will feel the pressure and the overwhelm and say, “At least God won’t put more on me than I can handle” as they cite this verse.

Friends, that’s not what this verse says at all! This verse is talking about TEMPTATION. The lust of the eyes, the lust of the flesh, the pride of life. The things that can cause us to walk off the path God has set before us. THAT is what Paul tells us God will not let overwhelm us. He provides a way for us to leave that temptation and follow Him.

Let’s look at the one big temptation and fall that most know of in scripture: David with Bathsheba.

David had positioned himself to be at the wrong place at the wrong time. He was home when he would have normally been out leading his troops. He was on his rooftop looking down on other roofs where he saw a woman bathing.
Escape #1: He could have chosen to not watch. When we see something that can lead us off God’s path, we can turn from it.
Escape #2: His servant told him that was another man’s wife. When we learn that something we desire so much belongs to someone else, we can turn away from it.
Escape #3: He had to have people go and bring her to him. When we have to work so hard to have what we want, already having two or more opportunities to pass it by, we can let it go.

David chose to ignore all the escape hatches, and walked with head held high into sexual sin that he compounded by murdering one of his Thirty Mighty Men. When we walk off that path so perfectly chosen for us, it doesn’t take long to rush headlong into the most deviant behavior.

Next time you’re tempted, whether it’s verbal, sexual, food, drugs, shopping, gambling, or whatever, turn to God. Look for the means of escape He provides, then RACE through it!

Next time you’re facing horrible circumstances that seem to stack up on you, fall on your face and seek God, but don’t say He won’t put more on you than you can handle. You’re not meant to handle that load. You’re meant to lay it on the One who saves not only your physical self, but your soul.