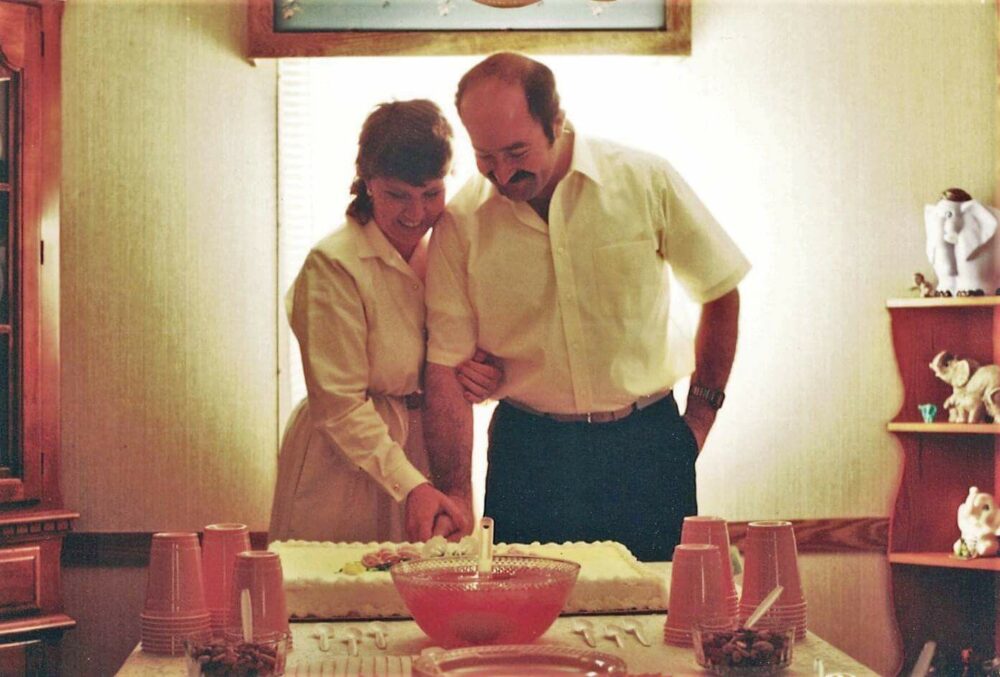 It was cold that day. Really cold. Cades Cove had snow on the ground and we just hoped that the roads were open. No Twitter back then to tell us.

I couldn’t find my pantyhose (that’s back when we wore them with our dresses.) Thankfully, Mary Weems rushed to Proffitt’s (it has been a while, hasn’t it?) to grab another pair and brought them with her.

A little delayed, Mary drove like a madwoman into Cades Cove, only to be stopped by those enjoying the pristine beauty of the mountains dusted with snow and daffodils shivering in the cold. I would hold my bouquet up in the windshield to signify we were the wedding party. Nobody seemed to notice or care.

Thankfully, Jack knew I wasn’t leaving him standing at the altar and waited. The preacher complained that it was so cold. Finally, everyone had arrived. I felt extra special when I learned that Elmer (Papaw Bryant) had gotten a new set of Dickies to wear to our wedding… AND a new John Deere cap!

It didn’t take long to say the words, to hear, “I now pronounce you…” but the traffic out of the Cove was a different matter.

The reception was here in the house I’m sitting in. The sheet cake covered the end of the dining room table. There were mints and nuts — all quite traditional for an afternoon wedding – kind of like my ecru linen tea-length dress. Michael Weems took pictures and video. The boys “decorated” the car.

Though we had packed the things we needed for our honeymoon weekend in a cabin outside Gatlinburg, we managed to leave the box with the coffee and other necessities sitting in the box on the floor in the kitchen. No problem, right? There was a grocery story right at the end of the road where we turned to go back into the woods. Just one thing… no checkbook (we used those a lot back then) and only $20 in cash.

We learned so much from that weekend:
1.) patience is a good thing
2.) don’t assume someone isn’t coming just because they’re late
3.) don’t leave the boom box behind
4.) don’t panic when you forget something and don’t have the money to replace it
5.) figure out how to thrive on what you have without worrying about what you don’t
6.) Jack could vault a tall loveseat (ask, we’ll explain)

Twenty-nine years ago today, I married my best friend and though we’ve had the sickness and health, the richer and poorer, the good times and bad, I wouldn’t trade a single moment. Not one.

I love you madly, Jack Bryant. Forever and always. Even after Friday when you retire. 😂