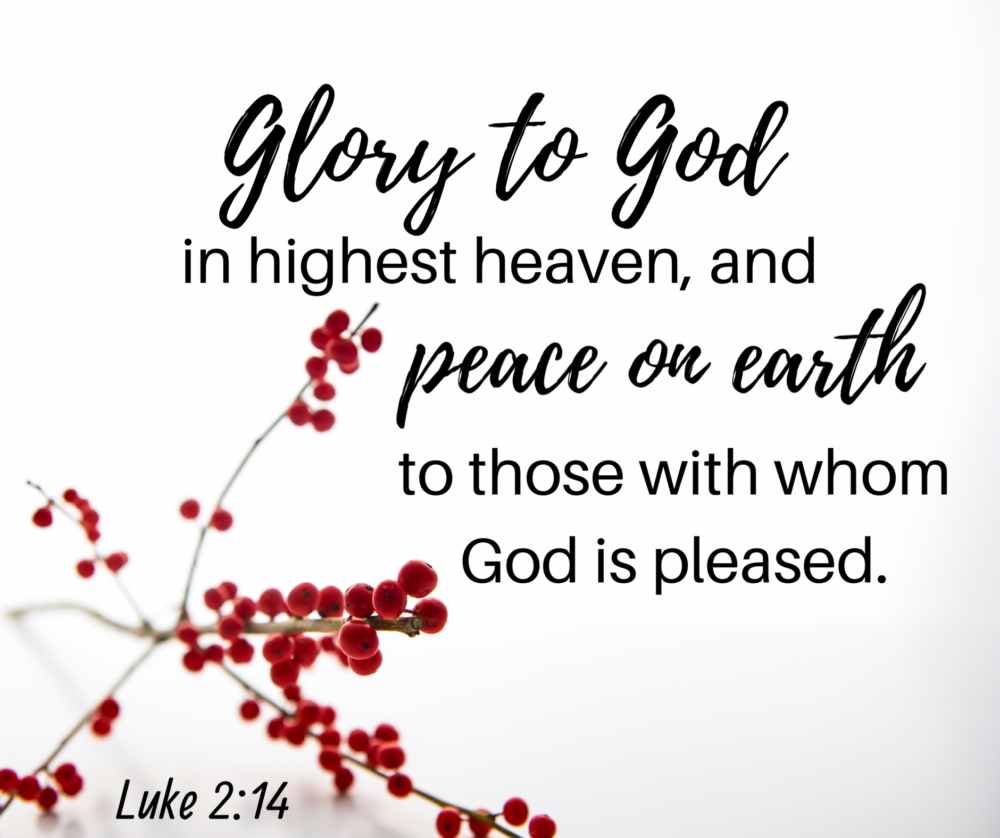 An angel had just told a certain group of shepherds in the field that the Messiah had come, born in a manger in Bethlehem.

Then a vast host of other angels joined that announcing angel, all singing these words:
Glory to God in highest heaven,
and peace on earth to those with
whom God is pleased.

The thought has occurred to me that sometimes I think of the shepherds as ignorant and unlearned. That’s not true. Jewish children were taught the Torah, most being able to recite the majority of it by age 12. They were schooled in the scriptures as well as their traditions.

When the angel came to announce the Messiah’s birth, these guys weren’t asking what was meant, they were excited because they knew exactly what was being said. They likely remembered the words of Micah, saying He would be born in Bethlehem.

When the angel choir began, these shepherds knew they were experiencing something holy and miraculous. And like any one of us, they decided to go and see firsthand.

We can’t go to the manger today to see Him wrapped in swaddling cloths, He’s not there. The Messiah grew up. He walked and talked to His people, the Jews. He did miracles that had never been done, even stealing some from the clutches of death.

Then, just as the prophets had said, He was tortured beyond recognition. Beaten and bloodied, He was stripped and hung on a Roman cross to die a criminal’s death.

Can you imagine those shepherds who lived long enough to see this? How could this be the Messiah? Were their hearts broken thinking they had believed a lie? Did they recall Isaiah’s words telling of this very event or were they stunned by the happenings?

Don’t we do the same thing today? We read the Book and see verses that tell of our success and that we will prosper and we breeze past those where Jesus said we would experience the pain and hostility that He did.

We ask and ask that one prayer we long to have answered, then are crushed to the point of turning away from Him when His answer is no or wait.

When we release control of us and our circumstances and stop getting angry when things don’t work out according to OUR plan we will be able to see the beauty of a Creator who developed a perfect plan for us to bring Him glory. That is, after all, why we exist.

So, today, when the job is tough or the shoppers rude or the thing breaks, give God glory. Sing it like the angels.

When that person can’t be with you for the Big Day, tell them you love them and give God glory. Not because you’re unhappy, but because He is deserving.

Get it? In every circumstance, glorify the King of kings and Lord of lords. Cheer the Creator. Bow before God Almighty and honor Him with all you are.

Faye Bryant is an author, coach, and speaker who helps individuals escape the lies of the enemy, live into God’s truth, and build a better life by first feeling, dealing, and healing their way through a stuck future or an abused past, toward a deeper path of purpose, and into the unhackable life of their chosen legacy. Hers is a story of resurrection: from death to life!

Who do you trust, rely, and lean on?