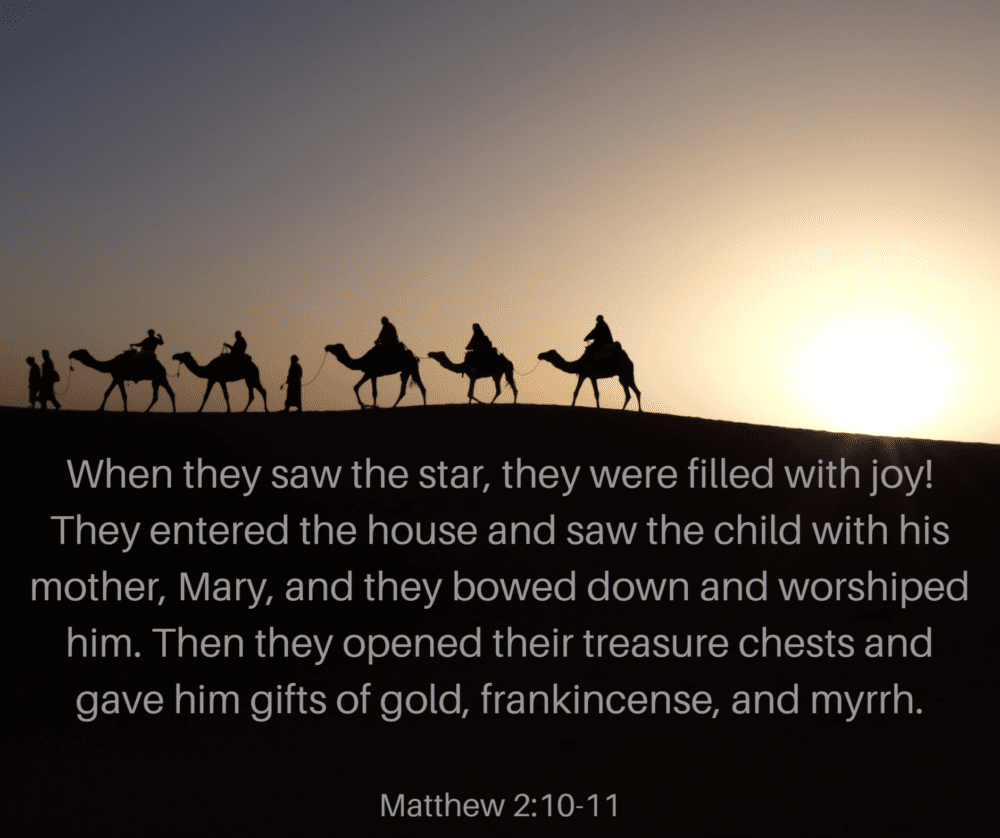 How many wise men were there who visited the Christ child?

Where were Mary, Joseph, and Jesus living when the wise men visited?

How old was Jesus when they visited?

I am so glad you asked these questions!

Did you know scripture doesn’t identify how many wise men were on the journey to find this new King? It simply tells the gifts they laid before the King. We tend to think of there were only three gifts, only three men. It could have been three who brought gold, three who brought frankincense, and three who brought myrrh. Or more. Or less. All we know is the scripture uses the plural for “man” so there had to be at least two.

Do you see in Matthew 2:11 where it says these wise men entered the house? They didn’t enter a stable out back behind an inn. It would seem that Joseph and Mary had found a house to stay in – whether they rented it or were staying with people – but it was no longer the stable. They were still in Bethlehem, though, that’s where the star led the men.

We tend to think that all of what we call the nativity happened in one night, but scripture doesn’t support that. Luke 2:6 says that while they were in Bethlehem for the census, the time arrived for Mary to deliver her baby. It would seem to be in the first hours or days of their arrival in town because their search for lodging yielded only a stable behind an inn.

We’re used to the census papers arriving, we fill them out, and send them back with little interruption to our lives. Not so when Augustus required this census of the entire Roman Empire. Everyone had to travel to their ancestral home and stay there until the official Roman census taker came though and counted, then dismissed them to return home. So it makes sense that after the baby was born and the shepherds had made their visit, the couple had more time to look for something besides a motel room, and found a house.

The book doesn’t say how old Jesus was at the time for this visit, but we can pick up some clues.

The wise men were most likely astrologers who had watched the skies for years. They told Herod they had seen the star then began their journey to see and worship the King. A journey from the Far East wasn’t a quick trip. It is likely it took over a year, maybe closer to two. We see the evidence of this in Herod’s order to kill all the boys in and around Bethlehem two years old and under in hopes of killing this usurper of his throne.

Also, in the scriptures about the wise men, we don’t see references to a baby, but to a child.

All that’s great clarification to know, but really, let’s look at this in a different way.

The night of Jesus’ birth, angels and a star appeared to Jewish shepherds. The Jewish Messiah had arrived. BUT the same star appeared to heathen Gentiles in a far off land, too. God was already setting up the acceptance of Gentiles into His Kingdom. God even spoke to these non-Jews giving them instructions to go home by a different route.
He was planning for you and me even then.

The response of these men was worship. They weren’t satisfied with just going to see the reason for the star anomaly, they took precious and significant gifts for Him. They followed the star, lay the gifts before the child, then bowed in reverence to Him. And they heard from the Lord.

These wise men weren’t thrown into the story to even out the number in the crèche, they were included to reveal the fact that God loves all mankind.

Let’s dig deeper into the Word to discover the truths we may have glossed over in the past.