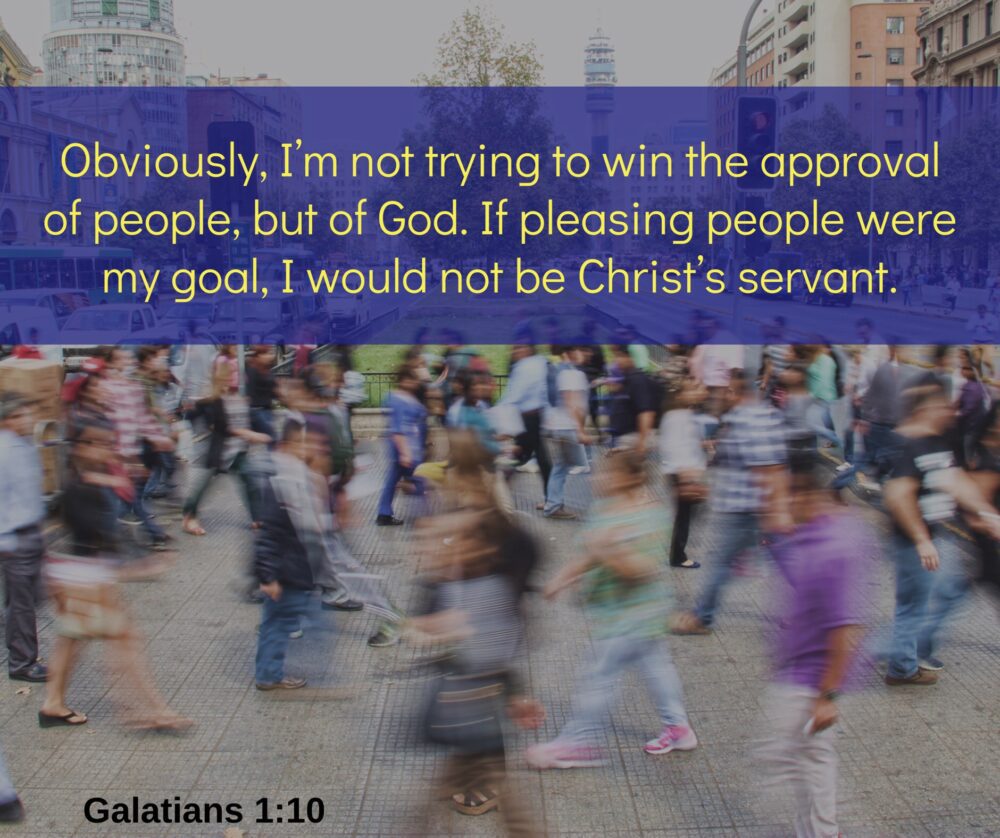 As a recovering people-pleaser, these words by Paul stopped me in my tracks when I realized what they say.

Obviously, I’m not trying to win
the approval of people, but of God.
If pleasing people were my goal, I
would not be Christ’s servant.

I have wept and confessed over that second part. How many times did I THINK I was serving Christ when really I was striving to please people? Too much lost time!

Back to Paul, though. He was being tough on the believers in Galatia. They were falling back into their old ways, moving away from God. His words were straightforward and some would say, harsh and unkind.

That’s why he wrote, “Obviously, I’m not trying to win the approval of people…”

Maybe a little tongue-in-cheek, he looked back on his words and thought he needed to throw a bit of levity laced with truth in there. I don’t know, but it sure got my attention.

While I don’t think Paul meant that we are to shun the approval of people – the cheers when we do well, the applause after a speech or song, the words of affirmation given – I think we have to be EXTREMELY careful that our focus doesn’t shift from Him to them.

As a speaker, I’m going to get on that stage, soapbox, or bit of floor where people can see me and share Truth (John 14:6). I like the applause and the words of encouragement, but I declare it to God beforehand that I want Him to speak through me, that He can take care of the outcome.

My goal is no longer to say and do things that will please people at the cost of the Truth.

Have you been more wrapped up in pleasing the committee in charge of the ministry you have a heart for or the Savior who died for you and those you’re ministering to? When you step up to share, are your words tempered by your need for “them” to like you?

Don’t worry, I think we all go through this until we’re made to understand the difference.

Time for an honest and fearless inventory of our hearts, y’all. Might as well do it today.