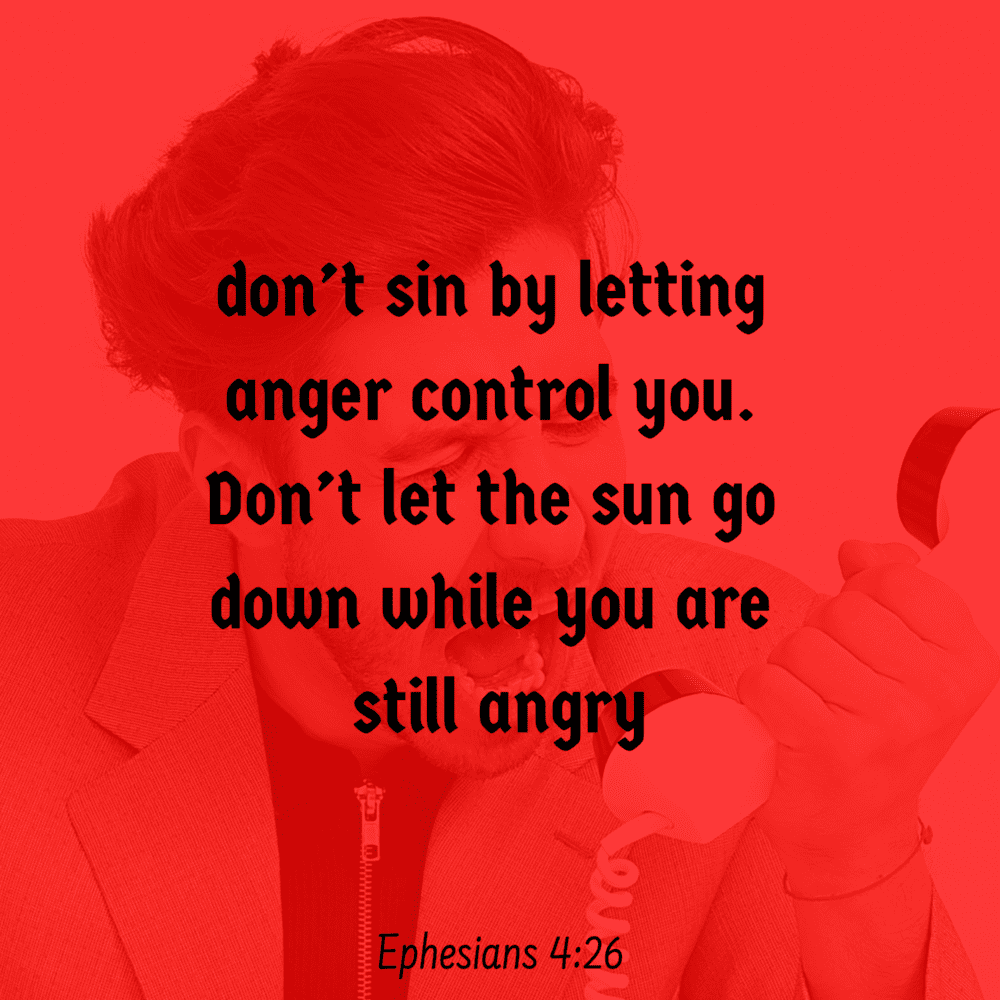 “And don’t sin by letting anger control you. Don’t let the sun go down while you are still angry”

Paul wrote these words to the believers at Ephesus. These people in Asia Minor had not known God, but goddesses and self. In this chapter of Ephesians, Paul writes to correct their behavior: stop lying, stop stealing, don’t let anger control you…

Some folks read this verse as “never get angry,” but it doesn’t say that. We’re made in God’s image and He got plenty angry at sin and its destruction, at people who chose to lead others away from Him, at those who mistreated His people and others.

Where the sin comes in is what we let that anger do in and through us.

Read those words again, “and don’t sin by letting anger control you.”

As believers we are to be controlled by only One: the Spirit of God given us upon our salvation. When we let anger or booze or drugs or lust or children or happiness or sadness or anything else control us, we have replaced God in our life with that controller.

We have the capability to stop that.

Yes, we do.
Read the words again, “And don’t sin by letting anger control you.”

If God is telling us to not do something, it’s something we can control.

But Faye! That person knows all my buttons! They make me so angry!!!

Yeah, that’s not a pass, either. I’ve said it before and I’ll say it again:

No one can make you angry.

Yes, people can do things that are hurtful and offensive and ugly, but anger is YOUR choice of response to THEIR actions.

Whoever controls
your anger
controls you.

Like Joshua said, choose this day who you will serve, God or self.

Don’t get me wrong, anger serves its purpose. It drives us to right wrongs, to bring justice to the oppressed, to make changes in ourselves and lead others to do the same.

We just have to be careful to not allow the emotion to take over the brain and thus our actions.

Today, when we feel anger rise up in us, let’s put our brains in gear and figure out why we feel angry. What’s fueling it? Is it the actual situation or is it an experience from years ago that we’re reliving? Is it a real offense or injustice or is it imagined? Don’t stop examining it until you have an answer.

That might mean you have to step away from the situation. Not run away. Step away. Give yourself space away from that situation in that moment so you can discern what is really being said, what has really happened, what is really driving the emotions.

That’s a great time to ask the Spirit God living in you to give you clear sight and wise discernment about what is actually going on.

Once your face has returned to its normal color, your breathing has returned to normal, and your thinking is no longer controlled by the anger, you’re ready to deal with the issue. And now it won’t be with wounding words or hurtful actions.

Oh, and don’t miss that last sentence. This matter evoking these strong emotions can’t be slept on, can’t be tabled until the next meeting. It must be dealt with swiftly. Otherwise you’re inviting the enemy to come in and start building his plans in your heart and life. Don’t do it!

You’re not that strong.

How to Be a Person After God’s Heart