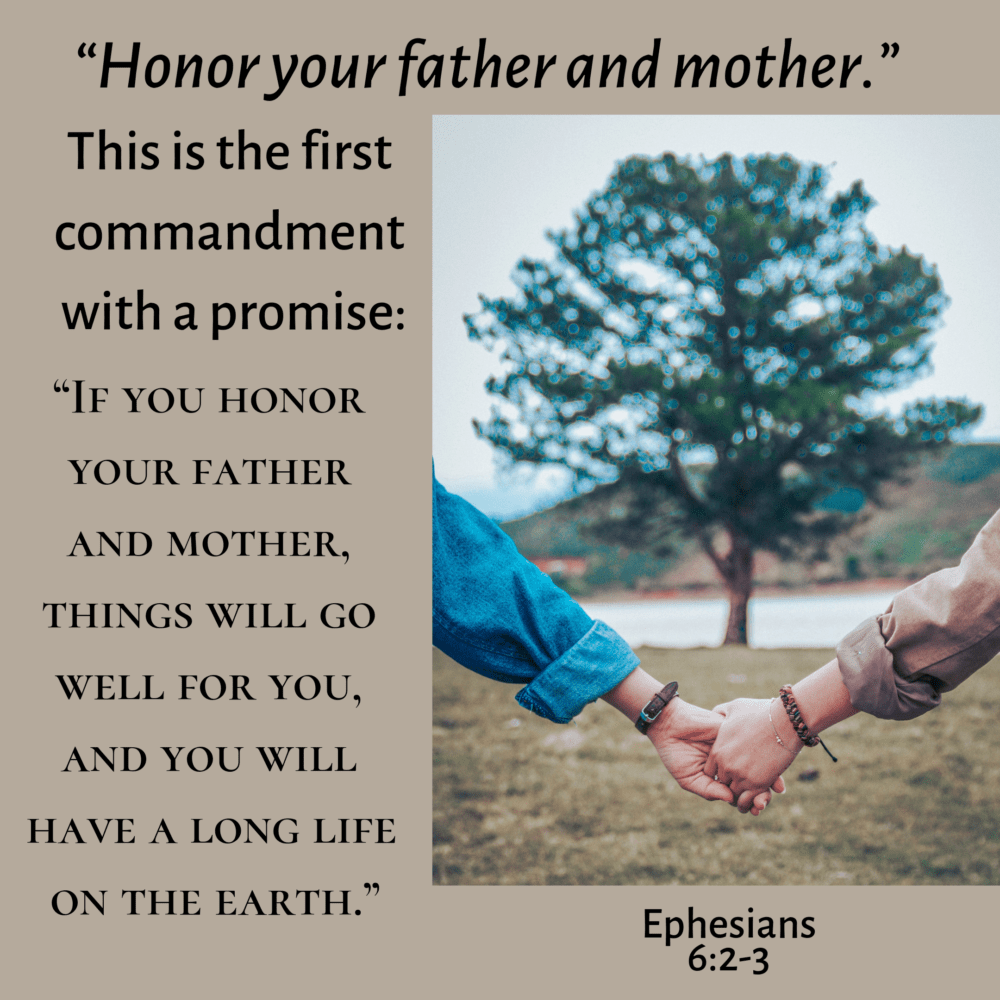 ‘Honor your parents’ Paul wrote to the church at Ephesus, reminding them it was the first commandment that also carried a promise.

That promise was, ‘things will go well for you, and you will have a long life on the earth.’
‭‭
I’ve joked in the past that that meant your parents wouldn’t kill you, but I’m pretty sure that’s not what Paul or God had in mind.

It seems pretty straightforward, doesn’t it? Honor your parents. Boom. That’s it. No caveats. No exceptions. Just honor ‘em.

God didn’t put a “unless they are not good parents” clause in there. He just said to honor them.

Why, you ask? It’s awfully stiff and unyielding.

Yes. Yes, it is. And I think that’s because we’re such shifty people, seeing everyone and everything through the lenses of our own experiences. We interpret everything subjectively, not objectively.

In the case of parents, we think ours are the cat’s meow until we spend the night with our grandparents or with a friend and see how different they are compared to Mom and Dad, and suddenly, ours aren’t as fabulous anymore.

Subjectiveness at its finest.

Many of you have amazing parents who loved you, taught you, and led you in the ways of God, but there’s a large number of people whose parents were nothing like that. They are at best less than honorable and at worst, completely dishonorable.

If those were your parents, you’re still called to honor them, and I get it, you want to obey God, but you can’t bring yourself to even be in the presence of the ones who abused you, who neglected you, who hurt you beyond comprehension. I understand.

Allow me to share a concept that can bring you into obedience to God and freedom in your heart and mind.

Live your life every day in such a way that people look at you and say, “What godly parents you must
have!”

Oh! Don’t correct them in that thought. Smile, say thank you, and move on.

(Of course, you do have to forgive them, but that’s a whole ‘nother topic.)

Let’s consider today how we honor our mothers and fathers. Maybe we start by not comparing them to other parents and focus on who they are and what they do.

No matter what kind of parents we have, let’s strive to live so close to Jesus that people think our parents were incredibly godly and absolutely wonderful.

We’re not perfect.
Neither are they.
Show them honor.