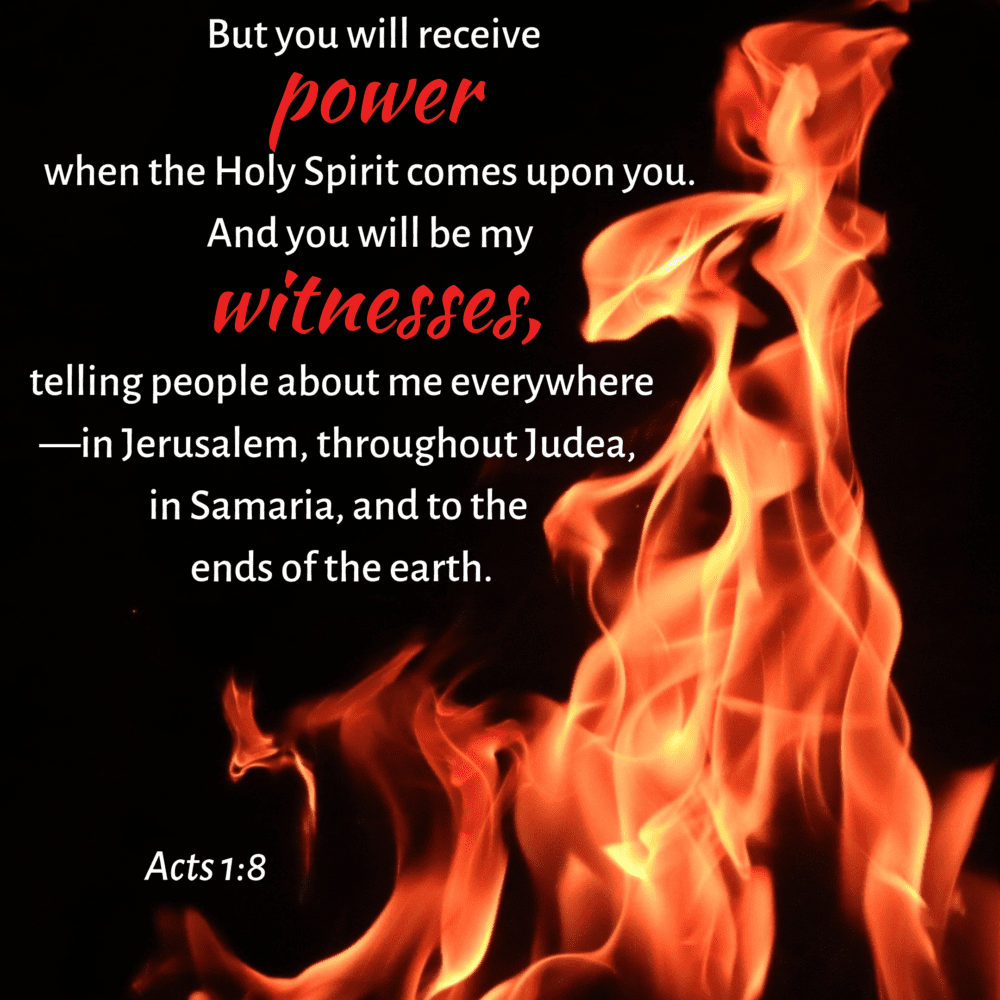 “But you will receive power when the Holy Spirit comes upon you. And you will be my witnesses, telling people about me everywhere—in Jerusalem, throughout Judea, in Samaria, and to the ends of the earth.” — Jesus

Can you imagine?
The apostles, the eleven who had walked those ministry years with Jesus then watched Him die were now spending time with Him after His resurrection. (Judas was gone.) Jerusalem was still in an uproar. The followers of the Way were being hunted down and killed.

In those days between the time He got up and the time He went up (to Heaven), Jesus taught these guys more about Himself and their mission.

His purpose was always to build the Kingdom of God – to glorify God and draw all people to Himself. Now He tells the apostles and closest disciples that this same purpose has now become theirs.

They had just experienced the lowest of lows, seeing their leader beaten to a bloody pulp, hung on a cross to die an excruciating death being mocked and lied about the whole time. Now Jesus was telling them His purpose was now theirs?

All but one had run from the horror when it started, fearing they would suffer the same fate. Each one knew he was nowhere near able to accomplish this lifelong task, and Jesus knew it, too.

You see, though, Almighty God knew this long before He said, “let there be light” and already had a plan in place.

And boy, did they get POWER!

Further in Acts we see these eleven, plus the one chosen to replace Judas standing before huge crowds assembled for the festival of Shavuot (Pentecost). They are no longer running away. They are standing on any riser they can find to proclaim the news of Who Jesus is and what He had done for them. No cowering. No hiding. No having a watcher to see if someone is trying to hurt them. Just sharing what they knew. Witnesses in Jerusalem.

Those people in the crowd? They knew the penalty for joining these followers of The Way. They knew that if they believed and followed Jesus they would join the ranks of those being sought and killed at the hands of their own leaders.

They chose to become followers and they received the power that the apostles had and they became witnesses. Before long, the truth about the King of all kings had passed out of Jerusalem into the countryside of Judea, across the mountains and plains to Samaria, and into Asia Minor.

Those witnesses kept sharing. Many of them had never seen Jesus, but the power of their words telling of transformation kept drawing more and more until here we sit in the 21st Century hearing the amazing story of The Way.

When we choose to follow Him, we STILL get that same power to be His witnesses! We get the same power that propelled frightened men and women to stand up, completely exposed in order to accomplish the purpose God had laid upon them.

What do we do with that power?

Too many times I have dropped it back at the house, not wanting to embarrass myself or anyone else. Too many times I’ve wanted to be the life of the party and never shared true Life with friends and acquaintances.

The good news is, God’s power has never waned. It has never stopped. He has shown me that as long as I have breath in my body, I can share my story of transformation and lift Jesus up. He will take care of drawing people to Him. I have that same power that under threat of torture and murder, led poor uneducated men to speak with authority. And to keep speaking. And to speak some more.

Maybe you don’t feel that power today. Maybe you just can’t drum up the strength to face someone telling you no, they don’t want to hear about this Jesus.

Stop a minute.
Don’t do this in your own power. Get reconnected to Him. Ask God for that same filling of the Holy Spirit that the apostles received. Surrender you to Him and watch what happens.

You will become His witness to your nearest family and friends, to your town and the next. Those who believe your witness testimony will begin to share theirs and the Truth will spread like wildfire.