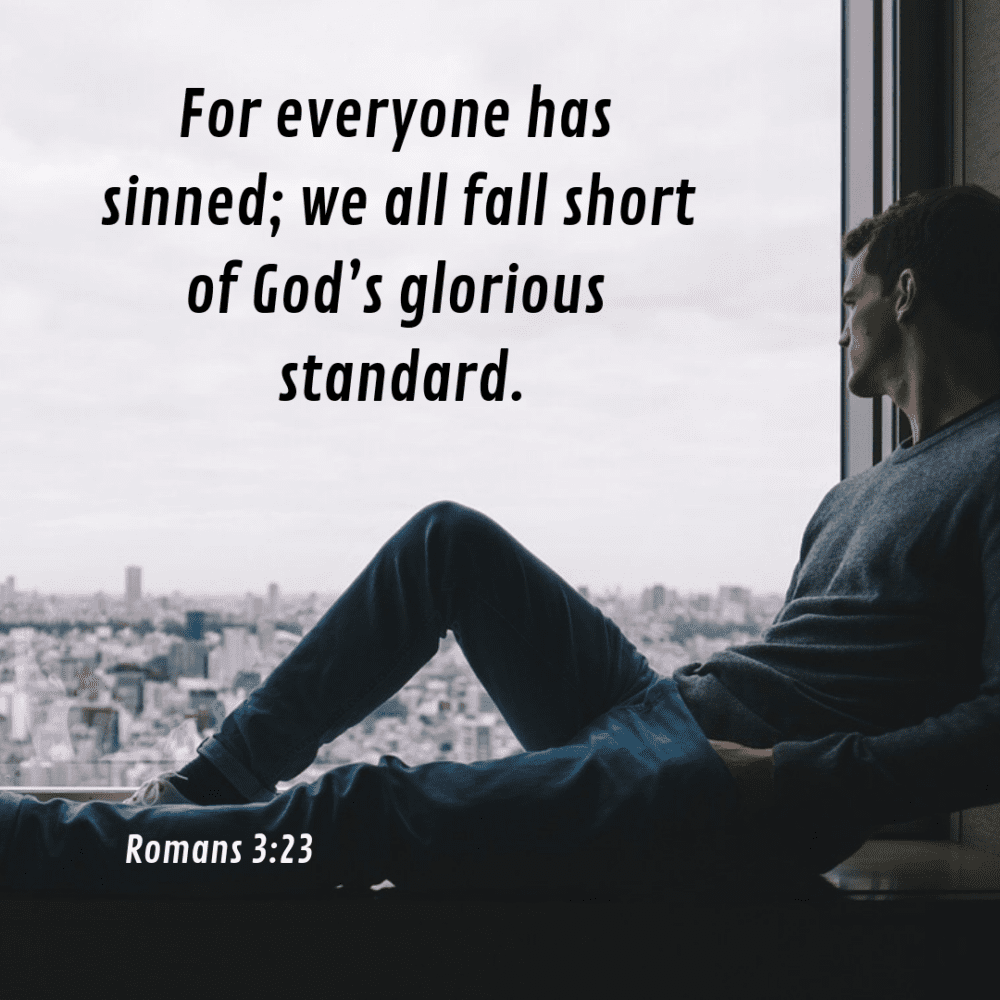 All of us. Well, the ones who are breathing. We’ve all done it.

See, sin is an incurable genetic disease that passes from one generation to the next. It’s in all of us from the moment of birth.

Sometimes we struggle with this when we think of sweet and innocent children, but the Book says “everyone,” so I have to believe God meant EVERYONE.

Maybe it’s that we don’t understand sin. We think of it as theft, murder, lying, envy, adultery – the “big” sins.

God thinks of sin as anything in the heart that is contrary to Him and His commands. Every attempt to follow Him and His laws in our own strength falls short.

We might not have lied yesterday, but today? Today someone asked us if we liked their new _________. In truth we thought it was hideous, but we didn’t want to hurt their feelings, so we lied.

It was just a little fib, right? For the good of someone, right?

To God, there are no degrees of sin. That’s something mankind came up with. To God, a little fib is no different than the whopper that ruins lives. That little fib has broken His Law and deserves the punishment as declared.

Later in this letter to the Church in Rome, Paul states that the penalty for sin is death – unending, unyielding eternal death.

When we learn this truth, we start looking for a way to cure it, to make it go away. While it is incurable, there is a Way to make it disappear.

When we accept the death, burial, and resurrection of Jesus as the eternal sacrifice for our sins, we trade our sinfulness for His righteousness.

When we realize our little fibs, our “borrowing” something without returning it, our “sharing” our concerns about that poor soul, our condemnation of others, our emotional attachment to someone other than our spouse are actually repainted lies, theft, gossip, murder, and adultery, we recognize our part in Jesus’ crucifixion.

The only way we could pay the debt of that fib, much less all the other sins, is to be forever separated from God. Forever lost in a place of torment where nothing of God exists. Forever.

Today, let’s work to move our thinking to match that of our Lord. Let’s ask Him to show us the sin in our life, for the Spirit living in us to nudge us when we stray from God’s path. (For me, I ask for a full-on smack up side my head. I tend to be clueless about nudges.)

Let’s look at ourselves in the light of God’s word and live according to His will.

Whether it’s your first time to do this or your millionth…
Agree with God about whatever sin exists in your life (confession).
Determine to turn from that sin and follow that determination (repentance).
Live in that newness, the righteousness of God in Christ.