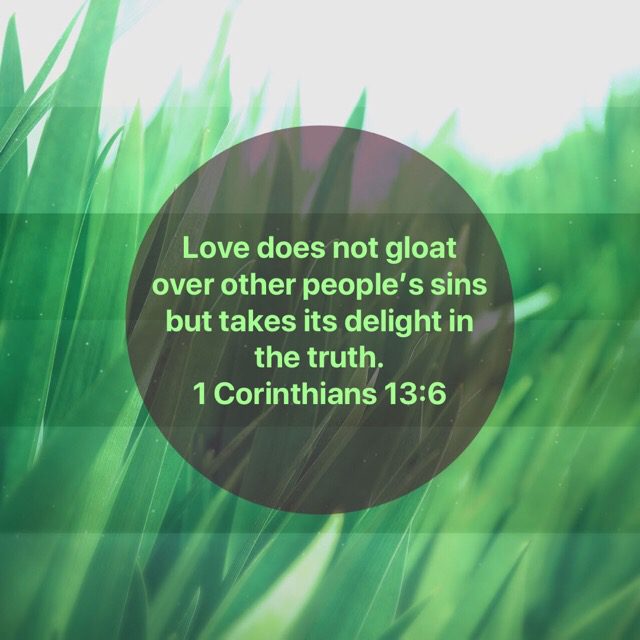 “Love does not gloat over other people’s sins but takes its delight in the truth.”

Ooh-wee! Have you ever done that? Gloated over someone’s sin? Done the na-nee-na-nee-boo-boo at their choices?

We do it. You know we do. We see someone in the news and we’re so quick to judge! And we go on about them as though we have no sin.

If we were really overflowing with God’s love, we would be weeping for that person, even if they are not. We who are believers understand what awaits the unrepentant who reject God. That is a most horrible fate, even though it’s chosen by the individual.

If we truly love, we will mourn for the ministries that could have been had this believer or that surrendered to the Father.

What we won’t do is gloat or rejoice over someone’s wrongdoing. We will try to show them truth and help them see their way to righteousness, but we will never gloat. To do differently leaves us joining them in their wrongdoing.

As we see others floundering in the separation from God that sin causes, let’s direct our hearts to grieve. Let’s take some time to build a relationship and share truth with that one so they can know a new and better way.

We certainly shouldn’t go in guns blazing! We don’t have to tell them what they’ve done wrong. We go in sharing and living Truth and what He says and let the Spirit of God guide them to all truth.

Today, when you see that news story or hear that juicy bit of gossip, skip that sing-song about how they should have known better and instead send up a prayer of mourning for them.

Oh! When you see Truth, rejoice in it! Whether it’s written, spoken, or lived out, notice it and let your heart soar in its presence. Show that Truth off, pointing to it as though a victor in a hard-won game.

I think that when we celebrate truth more than we vilify wickedness, people will want it more.

Shall we get started?